The four-year, nine-million-dollar New York Teen Initiative is a jointly funded investment of the UJA-Federation of New 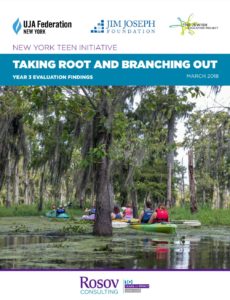 York and the Jim Joseph Foundation. With The Jewish Education Project serving as lead operator, the Initiative seeks to redesign and redefine the area’s Jewish teen engagement through the creation of compelling summer experiences. The Initiative builds on UJA Federation of New York’s historic and current efforts to support programs that attract teenagers to Jewish life and experiences. The Initiative is part of a national effort — spearheaded by the Jim Joseph Foundation — in which 14 foundations and federations are working together as a “Funder Collaborative” to expand and deepen Jewish teen education and engagement in 10 communities across the United States.