The Race for Justice is a Marathon

The Jim Joseph Foundation is pleased to share a series of reflections from beneficiaries of some of its newly-supported programs in leadership development and educator training. Rabbi Elie Weinstock offers reflections from earlier this year on his experience in the American Jewish World Service Global Justice Fellowship. 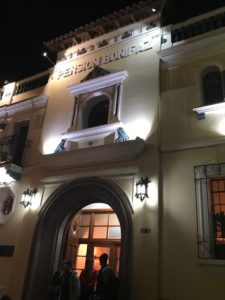 I’m here participating in the American Jewish World Service Global Justice Fellowship. I’m one of 13 rabbis in Guatemala to meet with and support advocates fighting for legal protections for human rights activists at risk of violence; midwives providing maternal health support for indigenous women; and members of an independent journalism collective seeking to expose abuses and corruption through a more open press.

It’s been quite an experience as I have encountered people, places, and issues that I really could never have imagined. 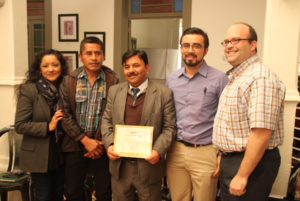 Presenting a certificate of appreciation to Bufete legal organization that represents victims of human rights violations. 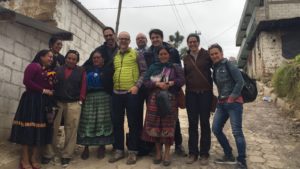 Meeting in the home of a midwife in a very rural village on the outskirts of Salcaja. (It was up a steep hill in the middle of nowhere!)

We had the opportunity to discuss the state of affairs in Guatemala with a very receptive US Ambassador, Luis Arreaga. He noted that Americans, religious leaders, visiting Guatemala to encourage and support those trying to improve their own country represented what America is all about: sharing American values to improve the lives of those in need.

While spending hours on buses traversing winding mountainous roads, I’ve had the chance to ask myself, “Is there a Jewish lesson in all of this?”

In a word: Justice.

Justice is critical to society. As Martin Luther King, Jr. said, “Injustice anywhere is a threat to justice everywhere.” We intuitively understand that society needs justice to function. Judaism also values justice. The Torah teaches (Devarim 16:20): “Tzedek tzedek tirdofe – Justice, justice shall you pursue.” This verse is often invoked as a call for Jewish participation in trying to address all sorts of injustice.

But what is justice and what is our role in pursuing it?

I believe the Torah repeats the word justice because there are many types of injustice that require our attention. Pick an issue, any issue. It may be something that challenges the Jewish community. Maybe it’s how Israel is treated at the UN. It may be the issue of racial or socioeconomic inequality or immigration in America. Or it may be corruption in Guatemala. There are, alas, many examples from which to choose.

There is a lot of tzedek needed today.

In addition to repeating the word “justice,” the Torah uses the word “tirdofe,” which literally means to run. The pursuit of a solution to injustice is a race we each need to run.

When it comes to running, people run at different paces and can run for different distances. The pursuit of justice is a different “race” for each issue and each person.

As long as everyone gets in the race.

Running isn’t always easy. It is strenuous, and it is sometimes cold outside. As the saying goes, “No pain, no gain.” There will be no justice unless WE run after it. It’s OK if it is hard or sometimes hurts. In a 1965 speech at Temple Israel in Hollywood, CA, Dr. King said, “We must always maintain a kind of divine discontent.”

There is justice to pursue everywhere. Whether in Guatemala or New York City, we need to be on the lookout for what is wrong and what we can do to make it right. The Torah doesn’t tell us to catch justice; we are commanded to pursue it and seek it even if we cannot achieve it.

It’s time for each of us to open our eyes, our minds, and our hearts, put on our justice shoes, and get in the race. The race for justice.

Rabbi Elie Weinstock is Rabbi of Congregation Kehilath Jeshurun (KJ) in New York, NY. He was a AJWS Global Justice Fellow in 2017-2018.