There was a time when “Don’t trust anyone over 30” was the mantra for the young. But if a new study of Jewish teens—the largest of its kind ever attempted—can be believed, the situation is much different today, news that will no doubt come as a huge relief to parents.

Eighteen-year-old Yael Berrol is intimately involved in Jewish life—be it in her Conservative synagogue in Oakland, Calif., where she teaches fifth-graders in the Hebrew school; during her 10 years at Camp Ramah in Ojai, Calif.; in Israel, where she rode with an ambulance crew; or at events at her B’nai B’rith Youth Organization (BBYO) youth group.

“The best part of BBYO for me are the conventions, a real connection with Judaism and a weekend away with a bunch of Jews,” says Berrol who’s one of a handful of Jewish students in her high school. “Being together is when I feel like my true self.” 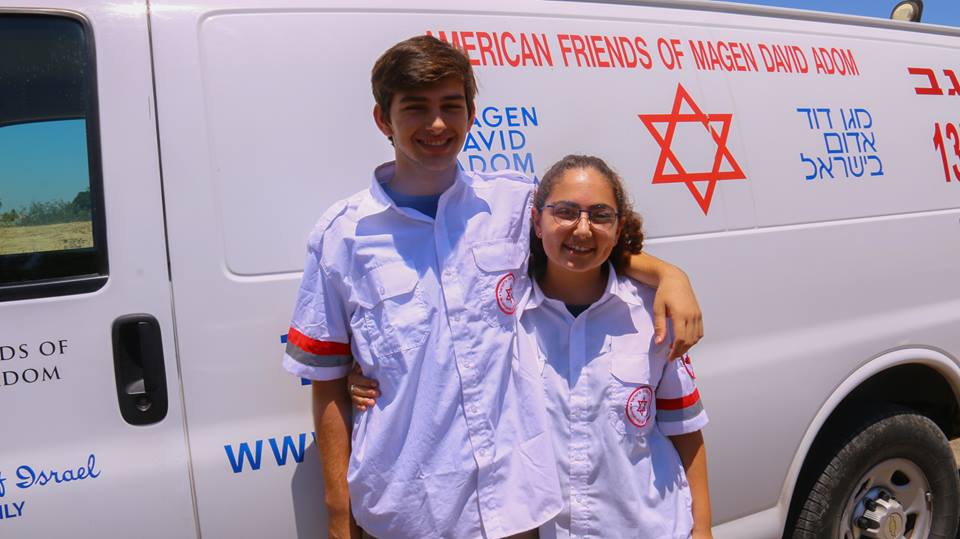 Yael Berrol and her station partner, Evan, at the Meitar MDA station outside of Beersheva. Credit: Courtesy.

More than 17,000 Jewish teens like Berrol participated in an online survey, developed by the Jewish Education Project and Rosov Consulting. Most of the names came off lists from 14 youth groups representing Jews of all backgrounds, including Bnei Akiva, National Council of Synagogue Youth (NCSY), Young Judaea, CTeen (Chabad-Lubavitch), United Synagogue Youth (USY) and the Union of Reform Judaism Youth (URJ/NFTY).

“We were basically interested in the lives of Jewish teens and understanding the impact of youth groups,” says Stacie Cherner, director of learning and evaluation at the Jim Joseph Foundation which, with the Lippman Kanfer Foundation for Living Torah, and the Charles and Lynn Schusterman Family Foundation, funded the study.

The funders were especially interested in teens’ social and emotional development, “how these programs impact them in these ways,” says Cherner. One happy surprise: how many teens actually took the time to complete the survey.

The almost 18,000 respondents came in part from the youth groups that contributed and from a link pushed out through social media. “And we were all impressed with the honest, thoughtful answers we got,” replies Cherner.

Most crucially, the study found that teens active in a Jewish youth group (regardless of denomination) tend to flourish socially, emotionally and spiritually as compared with those who are not. They also report feeling more connected to being Jewish, have higher self-esteem and better relationships with family, friends and other adults, and feel empowered to make positive change in their world.

“The parental issue was the big surprise,” says Rabbi Michael Shire, dean of the Graduate School of Education at Boston’s Hebrew College and a member of the study’s advisory board. And, he says, together with the results of a few other studies, it makes “a pretty good case for religious education and youth groups specifically. It seems that, along with a strong family and the belief in a higher power you’re connected to—this makes for someone who’s healthier in every way. It’s almost like these young people have a protective shell around them.”

Carl Shulman regularly sees these trends in action. “In our programming, we look at Jewish values, including how they were expressed in the civil-rights movement and other social-justice causes,” says Shulman, the youth engagement adviser at Temple Etz Chaim, a Reform congregation in Franklin, Mass. “And we make sure it’s tied to Jewish tradition—something in the Torah or Talmud that speaks to them.”

Shulman says youth-group advisers play a unique role in a teen’s life. “We’re a cross between a teacher, a friend and a camp counselor,” he says. “So they feel they can be open about their thoughts and feelings and confide in us.”

One feature of the study, giving the participating youth movements feedback on how their teens stacked up in a variety of ways, provided much-appreciated input, says NCSY’s international director Rabbi Micah Greenland.

“This is a terrific opportunity to learn about what our teens are gaining from involvement with us. It invites us to better understand and reflect on where we are relative to the field and where we have room to grow.”

Over at URJ, they’re also evaluating the results. “We knew it anecdotally,” says Miriam Chilton, URJ’s vice president for youth. “But now we have the data that demonstrates that participation in Jewish groups goes a long way toward achieving our goals of seeking meaning and seeing themselves as connected to both Jewish tradition and the world.”

Not surprisingly, adds Chilton, most NFTY/URJ teens ranked higher on social justice than on the ritualistic aspects of Judaism, she says. “It’s not good or bad, but it is reflective of Reform values.” 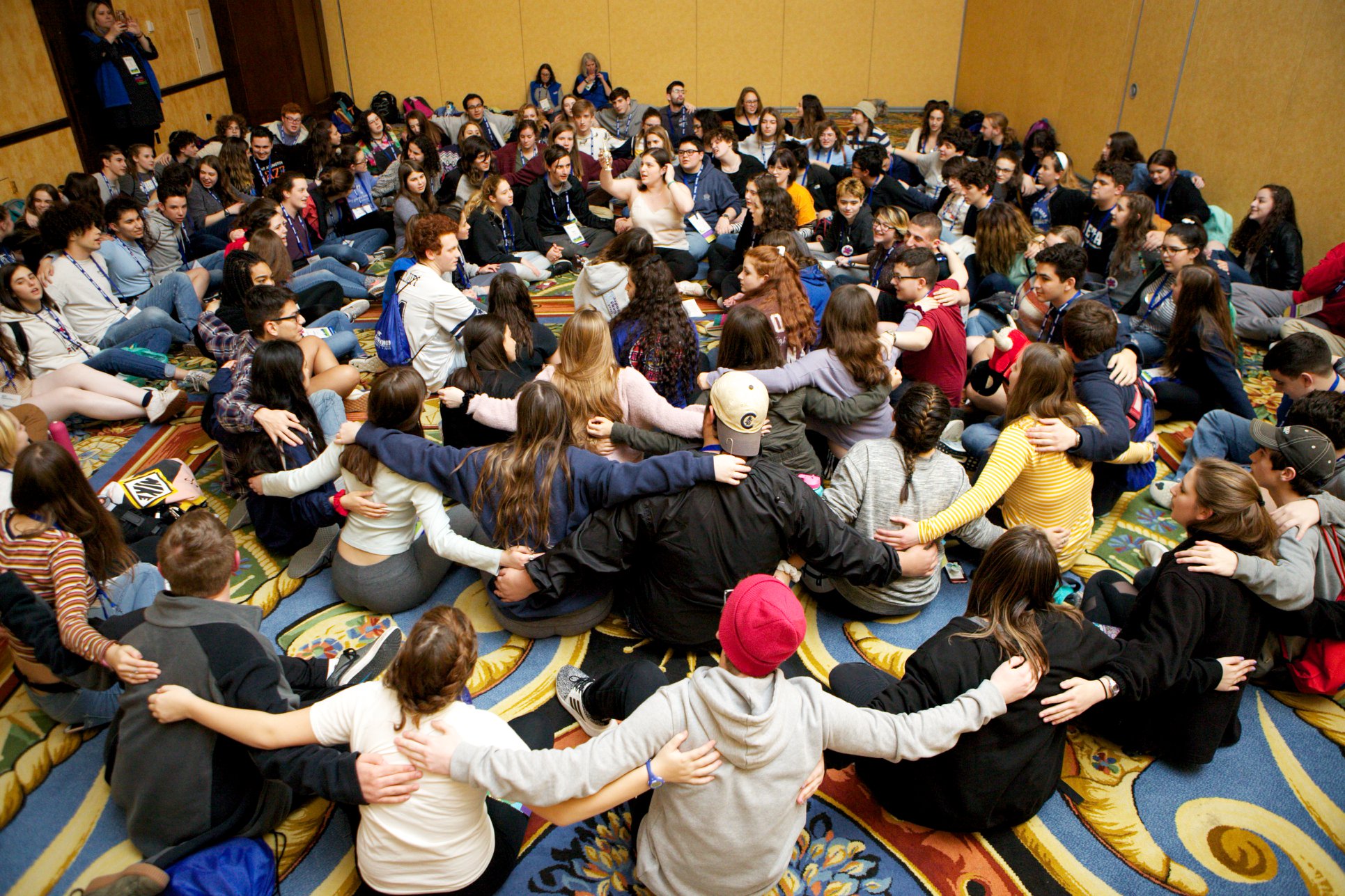 Participants in the Union of Reform Judaism Youth (URJ/NFTY) convention in Dallas. Credit: NFTY via Facebook.

Another take-away for Chilton: multiple points of contact result in maximum impact.

“Those involved in youth group, their temple, Israel and a Jewish camp, for instance, had the most positive impact,” she says. “And given the number of our families who have just one Jewish parent, whose connection may not be as strong, we can look to offer a wide variety of programming. It gives us a pretty compelling case for the best ways of working with the next generation.”

For David Bryfman, The Jewish Education Project’s incoming CEO, this study’s biggest gift is “giving organizers of Jewish youth organizations a good look at the outcomes they’re having in outreach today. Basically, the study shows the more kids doing Jewish activities the more engaged they are.”

The study was also designed to go well beyond the previous emphasis on youth groups as nurturers of Jewish continuity, he adds. “Here we’re looking at how their engagement makes them not just more Jewish but a better person, a better member of the community, more effective in the world and just more human. Some people might argue that this isn’t the traditional use of youth group, but if we don’t help them thrive, none of the rest of it really matters.

Besides,” he add, “when you can get the Reform, Conservative, Orthodox and even the unaffiliated to sign onto the same study, you’re already doing something right.”

The No. 1 finding, he says, is “even though we knew that youth groups have huge impact on teens, right up there with day schools, Jewish summer camps and trips to Israel, this study actually shows the power of that involvement.”

Looking to the future

“We got confirmation that generally speaking, we’re doing really good job in Israel engagement with our teens, with Jewish tradition, and how much Shabbat and the holidays matter to them, and even the extent to which they attribute these values to their NCSY involvement,” says NCSY’s Rabbi Greenland. “But we can also see that we are below average in the realm of taking responsibility for making a difference in the world at large. And, in addition to everything else we do, that’s something we’ve been talking about a lot since the results came out; it’s pushed us to look at ways to enhance that quality, too.”

“If we design programming that reflects the way young people see the world, we’ll be able to maximize personal development and Jewish identity and commitment,” says URJ’s Chilton. “This study also gives us a benchmark so if we adjust something now, we can look back in a few years and see how we’re doing.”

“The study sends a clear message that Jewish engagement doesn’t have to end at bar or bat mitzvah if you provide young people with programming they see as meaningful,” says Bryfman. “If the Jewish youth organizations can provide that, the teens will be there.”

It’s a message the funders are taking to heart.

“What we’ve learned from these teens is that they are very Jewishly identified, though their ways of expressing it may not be the same,” says Jim Joseph Foundation’s Stacie Cherner. “It’s confirming to us that we’re on the right path—that our investments are having a positive impact.”

As California teen Yael Berrol puts it: “We don’t have many Jews near us, but my parents have made it easy for me to connect. Our family friends are mostly Jewish, Camp Ramah is like my home, and my synagogue is where I go when I’m missing being with other Jews, when I need that grounding, in community and in my authentic self.”