Services Out, Service In

– by The New York Jewish Week

Marking its 10th year, Repair the World attracts young people — and critics — to its mission for social justice.

Jonathan Cohen, a former fellow at the growing social justice organization Repair the World, did not expect the volunteer position to involve confronting the police.

In April 2016, Cohen, now 27, saw a teenage student of his from the East New York Family Academy, where he was working as part of his fellowship, being held against a wall on a subway platform in East New York by two armed police officers. He intervened, asking the officers what was going on and vouching for the good character of his student. The officers — who thought the young man had started a fire on the tracks, a suspicion that proved to be unfounded — agreed to release him, and Cohen accompanied his student home.

“I lived an experience first-hand which Repair the World has trained the fellows for since the beginning: To truly understand your own privilege, you have to confront the realities of others,” Cohen wrote in a blog post about the incident hours later.

Since Repair the World’s launch 10 years ago, the national organization has thrived by equipping young Jews with the tools to tackle pressing needs in their local communities, ranging from food insecurity and housing and education issues to interfaith cooperation and dialogue.

In some ways, the group is swimming against a generational tide. Studies indicate that millennials and members of Gen Z are increasingly detached from Jewish institutional life. A March 2014 Pew Research Center survey pointed to a precipitous drop in synagogue attendance among young Jews. Pew’s “Portrait of American Jews,” from a year earlier, found that nearly a third of young Jews define themselves as having no religion. 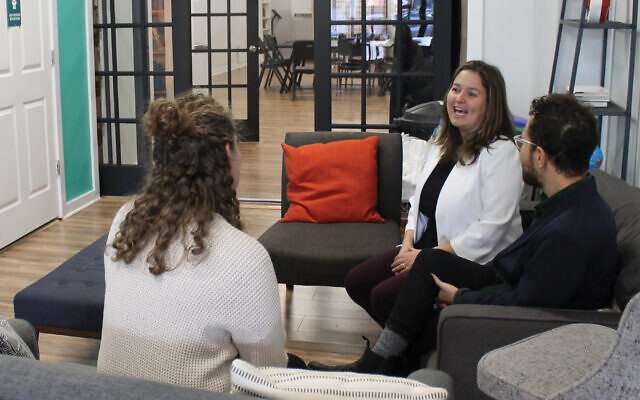 Yet Repair the World seems to have found a language — and a worldview — that speaks to younger Jews. And it is doing so by casting Jewish values in universalistic rather than particularistic terms.

“For young people, the question of living Jewish values authentically is central,” said Cindy Greenberg, Repair the World’s recently appointed president and CEO. (Prior to her appointment, Greenberg founded Repair the World NYC, an affiliate that mobilized more than 30,000 volunteers to meet local needs in Central Brooklyn and Harlem.)

“Service is actually at the core of the Jewish narrative,” said Greenberg. It is, she says, a mission that “aligns itself with what young people are interested in today.” According to statistics gathered in the organization’s annual survey, 85 percent of Repair participants believe service should be a central part of Jewish life; 91 percent reported caring more about being part of the Jewish community because of their service experience.

A report released in 2016 by the New York-based Jewish Education Project found that Jewish members of Gen Z are largely invested in becoming “better human beings” rather than participating in conventional religious practices, like attending synagogue.

The study found that while Jewish teenagers take deep pride in their tribal Jewish identity, they are largely checking out of traditional kinds of Jewish engagement.

“The report sets out a new way of looking at success when it comes to Jewish teen engagement today,” said David Bryfman, chief executive officer at JEP, a nonprofit that works with Jewish educators and clergy. “We can’t keep asking the questions we used to ask, like ‘How can we get more members?’ or ‘How can our programs make kids more Jewish?’ If we want to reach Jewish teens today, the question has to be ‘how can this program make teens more successful as human beings?’”

At the same time, organizations like Repair the World (and American Jewish World Service before it) have been accused by the Jewish right of stripping the notion of tikkun olam — Hebrew for “repairing the world” — of its Jewishness and for using social justice as a pretext for pressing liberal policies tied to the Democratic Party.

In his 2018 book, “To Heal the World?: How the Jewish Left Corrupts Judaism and Endangers Israel,” British author Jonathan Neumann accuses liberal Judaism of co-opting tikkun olam to advance a narrow — and sometimes anti-Zionist — social agenda. Earlier this year, academic Joel Kotkin argued in Tablet Magazine that the “social justice” brand of Judaism disdains “heritage, spirituality, and family,” and as a result is unlikely to reverse the steeply declining memberships at synagogues and other religious institutions across the U.S.

“We believe the opposite,” she wrote in a statement. “The pursuit of a just and ethical society and the imperative to care for our vulnerable neighbors is one of the central themes throughout the entire Jewish narrative. At Repair the World, we believe authentic service, meeting pressing local needs in our communities, is something all Jews can agree is important. Service is a valuable and meaningful expression of Jewish practice.”

During his year as a fellow, Cohen spent two days a week volunteering for a local nonprofit that provides technology education to young, low-income students across Brooklyn. Though Cohen, originally from Miami, was accustomed to diverse settings — he himself is half Mexican and has relatives from Trinidad — he was not prepared for the metal detectors at every school entrance, armed security guards and casual violence that frequently brought students to class with torn clothing and blackened eyes.

“I felt like I was living my Jewish values by stepping up for others,” said Cohen. “To use my privilege for good made me feel like I was putting Judaism into practice.” The experience, he said, challenged him to redefine Judaism as “not just a religion. It’s a way of thinking and living so that you can stand up for others.”

“Service is the best of Judaism,” he said, quoting the notion from Talmud (Sanhedrin 4:1) that “saving one person is like saving the world.” Today, he serves as the program manager for Repair the World in Miami where he helps manage five fellows and continues working with local nonprofits on education issues.

Brenna Rosen, 22, applied for the Repair the World service fellowship directly after graduating last spring from the University of Pittsburgh. Though she grew up attending a Reform congregation, her Jewish involvement felt “more cultural and social than personal” until she started to ramp up her service work in college.

Rosen, who studied psychology and religious studies, got involved with Challah for Hunger while on campus. The start-up mobilized college students to bake and sell challah and donate proceeds to social justice causes. The “hands-on” experience brought her face to face with how her “Jewish values could be translated into action.”

“People in my generation are looking to make Judaism their own,” said Rosen. “We’re looking to create impact in our local and global communities.”

Loren Shatten, 28, an alum of Repair the World’s Philadelphia chapter and today the interim chief executive officer of Challah for Hunger, agrees: She says pairing “Jewish values and volunteerism” can keep young people engaged in a way conventional services cannot.

While Shatten “grew up in a Conservative home,” including attending High Holiday services and family celebrations, service work is what allowed her to “come into my own Jewishly.”

Between 2013 and 2015, she served as a Repair the World fellow in Philadelphia, volunteering 20 hours a week for nonprofits working on education and food issues.

“The experience with Repair was my entry point into the working world, and has prepared me to lead my current organization,” said the millennial CEO. She is also the youngest member of Repair the World’s national board of directors.

Repair the World also taps into Jewish traditions beyond the synagogue and study hall – namely, the kind of historic activism that led to Jewish labor unions, housing cooperatives and settlement houses.

Part of that work, said Greenberg, is focusing on gentrification and neighborhood change in communities where Repair has taken root, from Detroit to Baltimore to Brooklyn. Since first opening the Crown Heights location in 2015, Repair fellows have watched coffee shops replace barber shops, and luxury high-rise apartment buildings replace affordable housing.

Andrew Davidov, program manager for Repair’s Brooklyn branch and one of its inaugural fellows, described his close friendship with a local barber, whose shop used to be a few storefronts down from the Repair the World space. As rents nearby increased, his barber was forced to pack up shop and move to the “other side” of Eastern Parkway, where rents remained more affordable. “I wandered into his chair a few years ago, and he’s taken care of me since,” he said.

Davidov, 27, whose grandparents lived in Brooklyn and the Lower East Side after immigrating to America after the Holocaust, says, “I want to give back to the community that gave so much to them.”