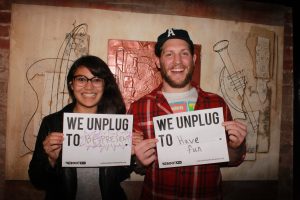 Founded 17 years ago, Reboot affirms the value of Jewish traditions and creates new ways for people to make them their own. Inspired by Jewish ritual and embracing the arts, humor, food, philosophy, and social justice, Reboot produces creative projects that spark the interest of young Jews and the larger community. Among Reboot’s productions are events, exhibitions, recordings, books, films, Do-It-Yourself (DIY) activity toolkits, and digital apps. Reboot also collaborates with local and national community partner organizations to adapt the resources to enrich their programming offerings for their own constituents. Since Reboot’s inception, 542 network members, over 1,000 community organization partners, and hundreds of thousands of people have looked to them to rekindle connections and re-imagine Jewish lives full of meaning, creativity, and joy.

Sign up to be a part of the 2018 National Day of Unplugging.

Last year’s annual National Day of Unplugging—the 24-hour respite from technology from sundown to sundown on the first Shabbat of March—had a record-breaking year, engaging over 45,000 individuals, with 275 programs. Across Facebook, Twitter and Instagram, the National Day of Unplugging has reached over 136 million people (and has been covered by more than 930 online, broadcast and print media outlets). The 24 hours includes live events across the country – including yoga, indoor rock climbing, analog-only parties, and more – which all celebrate people’s commitment to be more thoughtful about unplugging with Reboot’s signature cell phone sleeping bags and “I Unplug To _ Signs.” Since its inception, the National Day of Unplugging has reached over 112,000 participants with more than 1,000 events.

It was so refreshing to spend an evening unplugged, and connecting with people. It was a great reminder that our technology can distract us from the wonderful people standing in front of us. After attending the unplugged party I made a point to tell my friends that we need to start putting our phones away when we are together. – UNPLUG LA participant, 20s, Venice 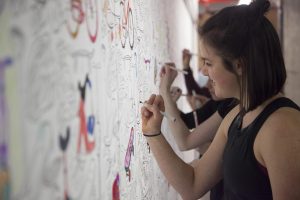 It’s not too late to sign up to host your own unplugging event in your community or take the personal pledge to unplug on the new website. As of this posting, there are already over 750 events set to take place around the world for this year’s National Day of Unplugging, a growth of over 275% from 2017. Reboot is also facilitating its own innovative unplugging experiences in the core cities of Los Angeles, San Francisco, New York, Chicago and Detroit – more information is available here.

Reboot is able to strike both a personal, communal and cultural chord through the do-it-yourself material it creates and distributes, and its tiered approach to programming. It produces signature events, such as large scale Unplugging parties or the construction of an experimental public “Sukkah City”, while also consulting with local and national community partner organizations to enrich their offerings with Reboot’s field-tested Jewish content. This includes everything from enhancing a local synagogue’s High Holiday program with an integrated 10Q experience, to helping a JCC launch a Jewish food festival that uses Beyond Bubbie’s programs of intergenerational exchange.

The event [reBar – an opportunity to reflect back to a Bar/Bat Mitzvah] was spectacular, interesting, meaningful, edgy a bit. I thought it was inclusive in a way that was really interesting to me. It is rare for me to go to an event which is a Jewish event, but where non-Jews are included. – reBar participant, 20s, East Bay 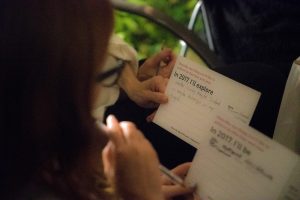 Reboot continues to look for new opportunities to fill a void in Jewish life. Reboot also is currently piloting Death Over Dinner – Jewish Edition in Los Angeles, San Francisco and New York, with partners IKAR and Death Over Dinner founder Michael Hebb, which works to break the culture taboos around death conversations and activate meaningful connection for people around their dinner tables through a Jewish lens.

Learn more about the many ways to engage in Jewish life through Reboot at Rebooters.net.