Learning with Maharat: A Series on Insights from Leaders in the Field

In this vein, representatives from different grantee-partners are speaking with the Foundation each month in Learning Sessions. While initially we planned for these sessions to be entirely internal, the insights and perspectives we are hearing from grantee-partners will be interesting and informative for others as well. We continue to approach our work with Kavanah, intention, to always elevate the efforts of others who help us pursue our mission. And we look forward to sharing brief recaps of each Learning Session. Read previous recaps on learning sessions with Daniel Septimus, CEO of Sefaria, Deborah Meyer, founder and CEO, and Rabbi Tamara Cohen, VP of Program Strategy, Moving Traditions,  Sarah Levin, CEO of JIMENA  Rabbi Benjamin Berger, Vice President of Jewish Education, Hillel International, and Mike Wise and Avi Rubel, Co-CEOs of Honeymoon Israel.

Introduction
Rabba Sara Hurwitz is Co-Founder and President of Maharat, the first institution to ordain Orthodox women as clergy, and she is the first orthodox woman ordained as a Rabba.  She has received numerous awards and recognition for her knowledge, leadership, and vision.

Maharat’s mission is to educate, ordain, and invest in passionate and committed orthodox women who model a dynamic Judaism to inspire and support individuals and communities.

The ordination of orthodox women is imperative to changing the conversation about women and women’s power. The unique value female clergy bring to the table is the same unique value female CEOs, producers, senators, mayors, and governors bring to the table.  They force an overdue shift in our communal norms and standards.  A female rabbinic presence can change the conversation around numerous intimate subjects such as sexuality and fertility; issues of Jewish law such as mourning and Shabbat and even difficult topics surrounding divorce.  Moreover, the ordination of women is a step towards ending gender inequality in a community where the greatest power, pay and prestige is reserved for rabbis. – Rabba Sara Hurwitz

From Small Beginnings to Major Impact 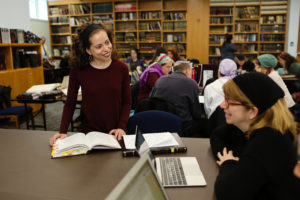 Maharat opened in 2009 with just three students, two employees and a $100,000 budget. Today Maharat has 36 students, 19 employees, and a $2.6 million budget. In just 12 years, Maharat has graduated 49 women who are serving as clergy across the Jewish community in synagogues, schools, hospitals, universities, and Jewish communal institutions.

Rabba Sara shared her thoughts on what it means to be an orthodox rabbinic leader today and how Maharat plays a central role in the Jewish education landscape:

So much has changed in just 12 years. I think that I can mark my journey by the reaction of the orthodox community and the community at large. When I was first ordained there was actually very little pushback. It wasn’t until the change in nomenclature, the change in title, that sparked a lot of controversy in 2010. That was very lonely, except outside of the orthodox movement I felt a lot of support and excitement, because the time had come. But within the orthodox movement beyond my own community there was a lot of skepticism and pushback.

Growth and Culture Change
Rabba Sara believes the next flashpoint was after the first class of Maharat students graduated and people were waiting and watching to see what would happen. All graduates found jobs, which of course was cause for celebration but also caused the next round of pushback in the orthodox community. Still, by this time sentiments had begun to change and Rabba Sara says it was not as lonely as in 2009 and 2010 when she was ordained.

She also found genuine support at this time. Others began explaining the importance of having a woman’s voice as part of the fabric of their community. Since then, two or three other times there has been a “bubbling up” in the orthodox community questioning whether women can serve as clergy, she said, and each time it feels less and less relevant.

There are always going to be detractors in communities and in the world, she says. What is important to Rabba Sara is to have a base of 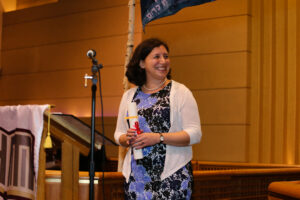 support. Maharat asks their program interviewees about their support network because “to do this work you have to have a good support network.” Why?  Change is hard. Maharat’s strategy is simply “feet on the ground”—having women occupy positions of leadership to show and prove what they can do.

Rabba Sara believes that even if everyone in the orthodox community does not accept women as part of their clergy team or leader, it is clear that nobody is going backwards:

We’re only going forward.  The amount of support and change in our community is beyond my imagination.  Even in the right wing of the orthodox community, women are searching and seeking for more professional roles and titles within the Jewish community.  I think that has a lot to do with Maharat — even if not all those women are part of Maharat’s academic curriculum.

The Impact of Maharat Beyond Gender
Women’s voices are necessary and important, as is being able to interpret text through the lens of our experiences. That is the gender piece of what we’re offering, she says. 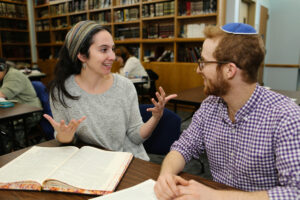 Beyond gender, Maharat is trying to open up Jewish culture—by giving women access to authority, to being teachers, and to being authorities on rabbinic texts.  She highlights that they are sending the message that leadership—the structure and power of dynamic leadership—should be more decentralized with more voices:

We are interested in trying to present a Judaism that meets people where they’re at, that is really relevant to 21st century Jews wherever they are.

Maharat students are successful chaplains in hospitals, teachers in schools, and have congregational pulpits; some have started their own communities and some are becoming rabbis in small communities. There are now 49 women out in the field impacting the thousands and thousands of people who they reach and engage.

Maharat is excited to launch its strategic plan, with a focus on:

Maharat’s trailblazing history now blends with a growing alumni network of like-minded people who support each other and their fellow graduates. Because of Maharat, every time a graduate goes into a new community they have to “blaze the trail” – but they no longer do it alone.