The Los Angeles Jewish Teen Initiative (LAJTI or the Initiative), through a funding partnership between the Jewish Federation of Greater 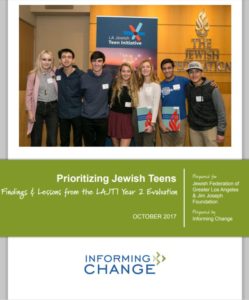 Los Angeles (the Federation) and the Jim Joseph Foundation (the funders), launched in 2015 and just completed its second year of implementation. To achieve the ultimate goal of engaging Jewish teens in Los Angeles in activities that promote a healthy, personally meaningful, and fulfilled Jewish life, LAJTI has three main strategies:

LAJTI seeks to create ripple effects throughout the community—including the teens who attend programs, their parents, program staff and leaders who design and deliver teen-focused programming, and community leaders and funders who champion and support the work.

The funders have partnered with Informing Change to evaluate LAJTI over its first three years. After completing the Year 1 evaluation report, which provided a baseline assessment of LAJTI, Informing Change collaborated with LAJTI staff and funders to develop seven evaluation questions to explore specifically in Year 2. LAJTI leaders wanted to understand certain phenomena in this second year of implementation that would inform the Initiative’s further development, while also retaining some of the original evaluation questions. This change also necessitated a shift in some of the data collection methods.

Learn more: A Taste of the Real World: Lessons Learned from a Community Internship Program for Teens