Learning with the Jewish New Teacher Project: A Series on Insights from Leaders in the Field

In this vein, representatives from different grantee-partners are speaking with the Foundation each month in Learning Sessions. While initially we planned for these sessions to be entirely internal, the insights and perspectives we are hearing from grantee-partners will be interesting and informative for others as well. We continue to approach our work with Kavanah, intention, to always elevate the efforts of others who help us pursue our mission. And we look forward to sharing brief recaps of each Learning Session. Read previous recaps on learning sessions with Daniel Septimus, CEO of Sefaria, Deborah Meyer, founder and CEO, and Rabbi Tamara Cohen, VP of Program Strategy, Moving Traditions, and Sarah Levin, CEO of JIMENA.

The Jewish New Teacher Project, a division of New Teacher Center, is dedicated to improving student learning in Jewish day schools by accelerating the effectiveness of new teachers and promoting the growth of school leadership

JNTP has a long-standing and valuable relationship to its parent organization, the New Teacher Center (NTC), which influences JNTP’s work, especially with of its focus on DEI efforts. This relationship with NTC also enables JNTP to bring “outside expertise” to the Jewish private school community, something less common in the Jewish communal sector.

As Nina shared her insights, she explained that she was modeling how JNTP runs various training and support programs for educators. The collaborative norms JNTP brings to all shared learning include:

JNTP and the New Teacher Center (NTC): A Mutually Beneficial Relationship
Founded in 1998, NTC started as a UC Santa Cruz Department of Education initiative to support new teachers as they started their careers. NTC pioneered the successful “new teacher induction model,” leveraging seasoned educators to support those who were new to their field. Once the program was in place with a stable budget and developed content, they parted ways with the university to increase their range and impact.

Ellen Moir, NTC’s founder and CEO for 20 years, says that relationships are key to NTC’s mission. Moir, who grew up disconnected from her Jewish roots, was contacted by the AVI CHAI Foundation about bringing NTC’s work on teacher retention, cultivation, and success to Jewish private schools. She felt that this was a key personal moment – her son was of Bar Mitzvah age, and this was an opportunity for her professional expertise to connect with a neglected part of her personal life, as well as to fulfill her belief that “all students deserve a good teacher.” 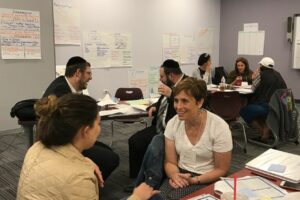 Early on, NTC’s work was split into “projects” focused on public schools in specific geographic locations; as these separate initiatives were absorbed into NTC, the “Jewish New Teacher Project”—the only one to focus on private schools—was founded in 2002.

As part of NTC, JNTP can leverage the resources of a large organization. This includes NTC’s larger budget and staff, back-office functions such as HR and legal, an R&D department funding new content development, and quality research into impact and best practices, as well as a window outside the Jewish community and exposure to greater diversity of experiences.

As JNTP’s host, NTC benefits as well. JNTP pays overhead to NTC, contributes to the diversity of the organization, adds the unique perspective of the private school community, and benefits from the thriving relationship between the two organizations.

The New Teacher Center’s New Focus on Social Justice and Equity through Education
In the past five years, Moir and her two other founders retired. The new CEO is Dr. Desmond Blackburn, a former superintendent. The entire C-level leadership team is new and is more geographically diverse, expanding NTC’s national presence.

We work to disrupt the predictability of educational inequities for systemically underserved students by accelerating educator effectiveness.

The focus is shifting from teachers’ needs to students’ needs, with five target student populations defined as Students of Color (Black/Brown/Native); English Language Learners (ELL); Students with Disabilities; Students living in Poverty; and Children of Immigrants. Importantly, this shift has called attention to diversity within Jewish schools – socioeconomic, cultural, and religious diversity —that may not always be apparent. Although at first Jewish educators do not always see the diversity in their schools, when asked at trainings to reflect on their schools and their own classroom environments, Nina notes:

They start to realize there’s cultural diversity between Ashkenazi and Sephardi. In Brooklyn there’s a strong Syrian community, in LA there’s a very strong Persian community, and in all schools there are kids with learning differences. There are also very wide-ranging socioeconomic differences. When they start to think about who’s in their classrooms, the room gets quiet and they start to really get sensitized to things they were not paying as much attention to previously.

Reflections on JNTP’s DEI Journey and Conscientious Inclusion
From 2017-2018, the Pacific Educational Group led NTC staff in two annual two-day workshops on Courageous Conversations About Race. These powerful reflections on race were predicated on four agreements that JNTP brings to all professional learning:

Although these were uncomfortable and difficult conversations for JNTP staff that took them beyond their comfort zones, the experience underscored the urgent need for change. This sparked other DEI work, including a JNTP Team White Fragility book club, a private learning session with Dr. Rivka Press Schwartz, and a move to incorporate diversity and equity into JNTP content.

JNTP staff experienced all along that Jews may not necessarily fit into the dominant narrative of white people as perpetrators of white supremacy. From 2020-2021, NTC’s DEI focus shifted from one solely focused on race to Conscientious Inclusion, which broadens the view of diversity to include multiple identities of people. NTC created Affinity Groups to provide space for colleagues to come together over shared identities, such as the People of Color, LGBTQ, and Nina chairs the Faith-Based Affinity Group. NTC also began working with the Valbrun Consulting Group on the Intercultural Development Inventory (IDI). 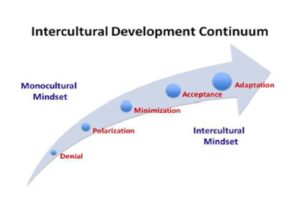 Based on a survey of every NTC employee, NTC and JNTP are at the “Minimization” mindset. Those in the Minimization mindset are either part of the minority group and don’t want to call attention to themselves or are the dominant group and fail to notice or differentiate others. NTC and JNTP are working towards Acceptance and Adaptation.

Conscientious Inclusion focuses on individual stories. JNTP’s emphasis on relationships expands this conversation. Although he comes from a public school background, NTC’s current CEO values religious education, helping JNTP continue to build and strengthen the relationship with its parent organization. NTC is so committed to work along the IDI continuum toward Acceptance and Adaptation that they have built into their staff learning days dedicated time to focus on Conscientious Inclusion and relationship-building among staff.