Taking Judaism’s sacred texts and building an online living library is a major undertaking. But that’s exactly what Sefaria has done. From Tanakh to Talmud to Zohar to modern texts—and all the volumes of commentary in between—Sefaria’s platform for Jewish learning enables students and scholars around the world to learn, discuss, question, and explore old texts in new ways. Today, more than 300,000 users access Sefaria each month. Many thousands more engage with Sefaria’s resources on third-party websites and apps that use Sefaria’s free data and API to power their projects.

Sefaria’s new two-way Linker is the latest major development for anyone interested in learning and exploring these sacred texts. The Linker automatically connects Torah content across the internet to primary sources in its library, and vice versa.

Websites that use the Linker give their users direct access to any primary sources they cite in Sefaria’s library, allowing curious learners to go deeper in their study. At the same time, the Linker brings the world of contemporary commentary to Sefaria by showing links in Sefaria’s sidebar to external websites that embed the free Linker code. Put simply, users can now explore beyond the confines of the Sefaria library and find relevant content from Jewish thinkers across the internet directly from Sefaria.org. 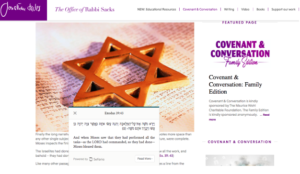 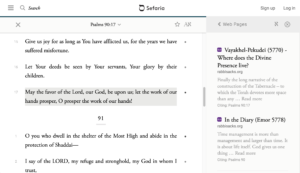 The Sefaria project has become the digital home of the book for the people of the book. Sefaria is not just creating a vital online resource, but it is opening up our ancient heritage to a new generation on a global scale in a digital age.
—Rabbi Lord Jonathan Sacks

With the launch of this new linker, Sefaria continues to emerge as the nexus of Torah on the internet, connecting more people with more great Jewish content and allowing for new layers of Torah study and conversation to flourish in the process.

The Linker is a free JavaScript plugin for websites that include citations to Torah texts. To learn how to add it to your website, visit Sefaria.

The Jim Joseph Foundation is a funder of Sefaria.