In order to become a rabbi, Benay Lappe had to go back in the closet.

It would be nearly a decade after she was ordained in 1997 that the Conservative movement’s Jewish Theological Seminary would lift its ban on gay rabbis. So she spent six years during her studies hiding her sexuality and relationship status.

“It was extremely, extremely difficult and painful,” recalled Lappe, 59. “I had no idea it was going to be as hard as it was.”

The experience led Lappe in 2003 to found Svara, a yeshiva where she and other members of the LGBTQ community could be themselves and study Jewish texts.

“I was in the closet in school and never really had the chance to learn with my whole self present,” she told the Jewish Telegraphic Agency earlier this month at Svara’s headquarters in this city. “So when I got out of school I was a rabbi, but needed to learn for the first time in an integrated way. On a very personal level I started Svara to be that place.”

In its beginning, the yeshiva was just that. But things have changed as the LGBTQ movement has gained wider acceptance, including in the Jewish community. Today, all non-Orthodox Jewish movements ordain LGBTQ rabbis and allow same-sex weddings.

At an evening beit midrash program earlier this month called a “One-Night-Stand,” about two-thirds of the 42 attendees did not identify as part of the LGBTQ community. That is higher than usual — usually between half to nearly everyone at Svara events is queer depending on the type of program— but not entirely out of line.

Lappe traces the shift back to 2013, when she partnered with the nondenominational Jewish community Mishkan Chicago. Attendance grew, including by those who do not identify as LGBTQ.

While Lappe still wants Svara to be a space for LGBTQ people, that in itself is no longer the singular focus. 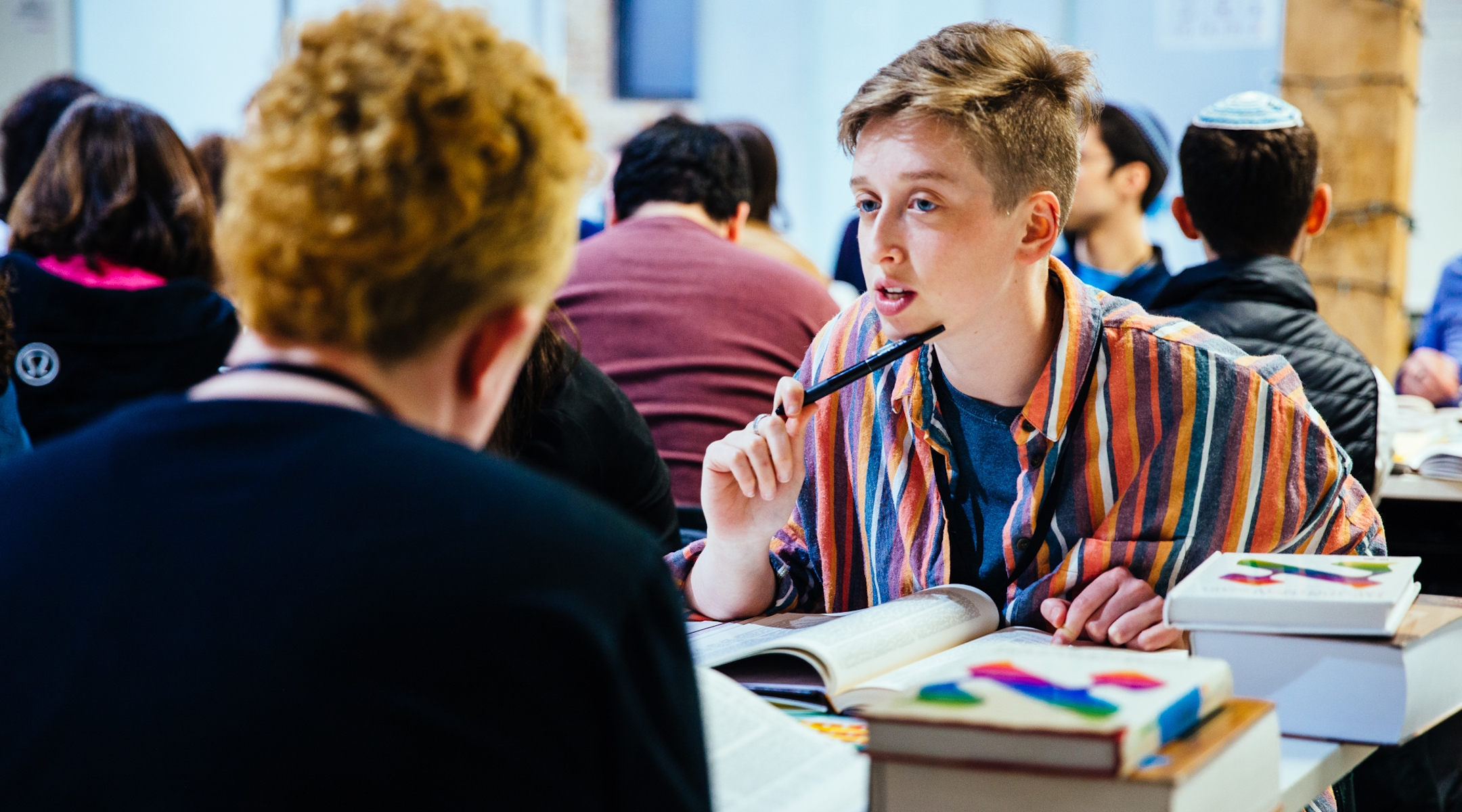 Essie Shachar-Hill has been attending events at Svara for three years. (Jess Benjamin)

Svara now has a budget of $1.4 million, which comes from program fees and donations from individuals and organizations such as the Jim Joseph Foundation, Crown Family Philanthropies, the Walter & Elisa Haas Fund and the Natan giving circle. The yeshiva hosts a range of programs, including weekly Jewish learning programs, fellowships and a five-day Queer Talmud Camp, which attracted applications from some 500 people, mostly millennials.

Lappe also encourages former students to host their own learning events, and there are currently 11 informal study centers around the country created by Svara alumni.

The rabbi believes that the Jewish community needs to revitalize its approach to text study, making it more accessible to people of all backgrounds and abilities, and find new innovative ways to read the canon. Lappe says that many queer people’s experiences of being outsiders and on the margins make them “particularly suited” to do so.

“We’re focused on raising up queer and trans teachers and readers and beit midrash conveners and rosh yeshivas who have the life experience of what we call ‘crash,’” she said. “Crash” is what happens when people realize “‘the way I thought the world was ain’t the way it is, and the fact that I’ve survived means that I know a lot about how to deal with that.’”

Some people still come to Svara because it is the only Jewish learning space where they feel comfortable. That’s the case for 25-year-old Essie Shachar-Hill, who identifies as non-binary.

“I come to this one because it feels really low barrier, and accessible and inclusive, but I wouldn’t necessarily risk my own safety going into a more traditional” Jewish environment, Shachar-Hill said.

But for others, it’s Lappe’s accessible approach to Talmud study that draws them.

At Svara, texts are read only in the original language, and students are expected to look up in dictionaries any Hebrew or Aramaic words they do not understand. For some people that might be every single word, but Lappe is there to help.

At the “One Night Stand” event earlier this month, Lappe and another Svara staffer, identified by the sparkly purple fairy wings they wear on their backs, walked around to answer questions about the passage being studied.

Benna Kessler, 31, has been attending Svara events regularly for 3 1/2 years. She does not identify as queer but appreciates the focus on studying Talmud in its original languages. 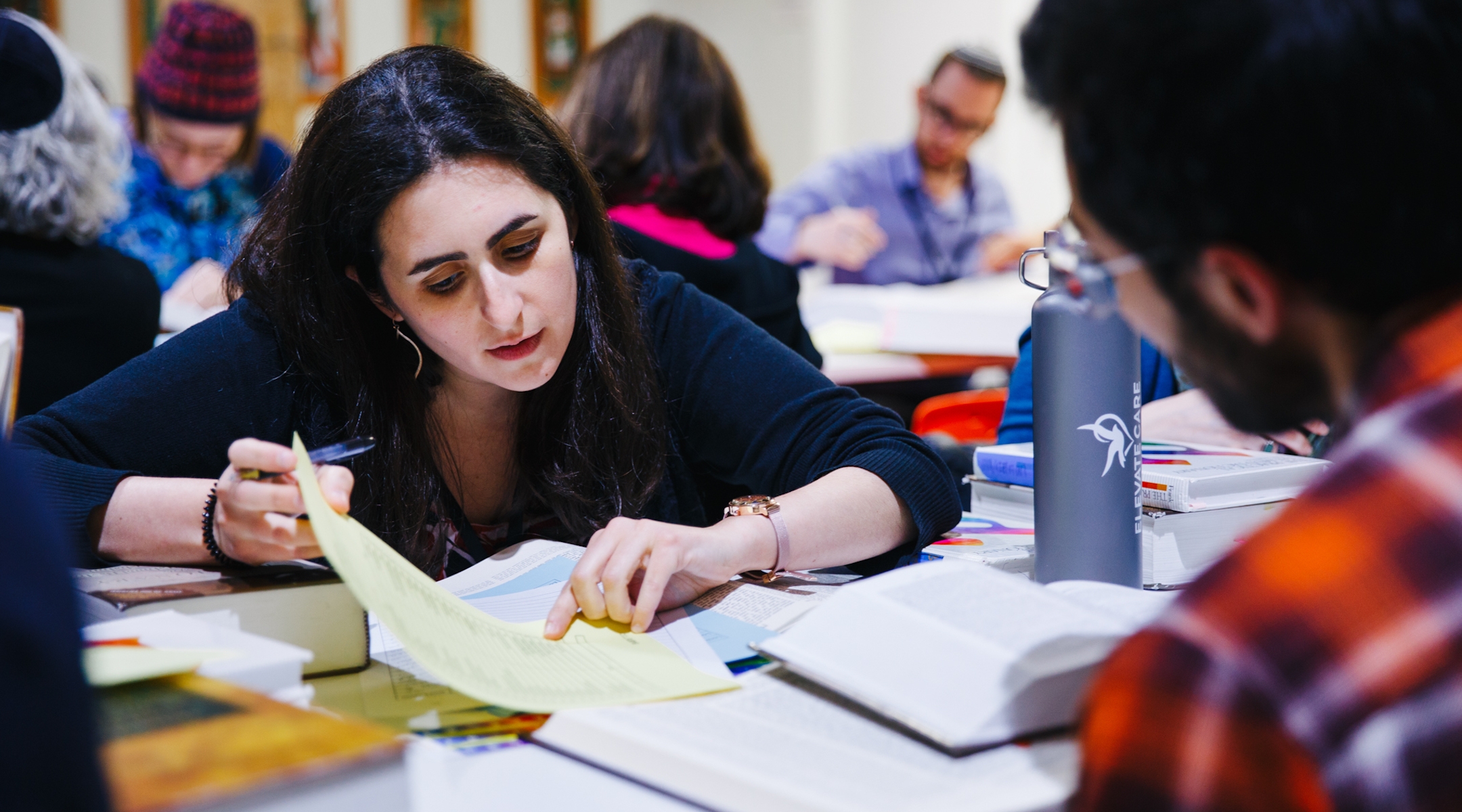 Benna Kessler never studied the Talmud in its original language prior to Svara. (Jess Benjamin)

It’s not always easy to find the balance between a space where queer people feel comfortable and one that is open to allies, Lappe said, pointing to the fact that at the “One Night Stand” event, LGBTQ participants were in the minority.

“For the trans folk in the room, it probably didn’t feel as much like ‘I can bring out some of my ideas and thoughts’ as much as it does on nights when it’s 70 percent queer and trans folk,” she said.

Ultimately, Lappe sees her yeshiva as appealing to people who feel alienated from the Jewish community, whether due to their sexuality, gender expression or something else.

“That’s what happens in a queer normative space, the folks that bring their full selves are not just the LGBT folks,” she said. “It’s folks who didn’t feel like they could talk about ‘X’ about themselves in another space. Now they can.”